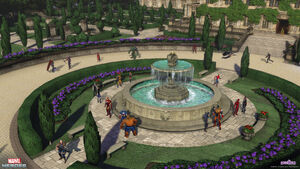 Located at 1407 Graymalkin Lane, just outside of Salem Center, Westchester County, New York, the original ancestral Xavier estate was built in the late 1700s. Currently owned by Professor Charles Xavier, after the death of his mother, this sprawling mansion was erected near Breakstone Lake and serves as a school, as well as the secret headquarters of elite teams of mutants, primarily the X-Men.

Professor Xavier later met with Fred Duncan, an FBI agent investigating the growing number of mutants. Professor Xavier told Duncan of his plan to locate young mutants and enroll them in his "School for Gifted Youngsters", using his ancestral mansion home as a base to train them to use their powers, as well as provide them conventional educations, for humanity's benefit. The base included an off-limits west wing with subterranean medical labs, a training facility called the "Danger Room", an aircraft hanger with a Stratojet and helicopter, and Professor Xavier's mutant detection device, code named "Cerebro". Cerebro's main function was to locate mutant signatures, but was also integrated in the mansion, as the school's A. I. Professor Xavier later moved Scott Summers into the mansion and, over the following months, assembled his original team of X-Men: Scott, who took the name Cyclops, Iceman, Angel, Beast, and Jean, who took the name Marvel Girl, and opened his school as the headmaster.