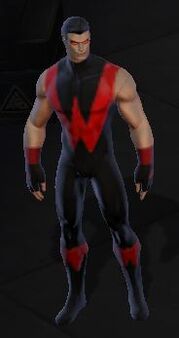 Simon Williams was the younger of two sons born to Sanford Williams (an industrialist who founded the highly successful munitions factory called Williams Innovations). When his older brother Eric Williams declined his father's offer to join the family firm, Simon, the more studious, less athletic of the two, readily accepted. When Sanford Williams died, Simon inherited full control over the business, although he was only 22. Under Simon's inexperienced management, Williams Innovations began to lose its competitive edge in the marketplace to such rapidly growing firms as Stark Industries.

Desperately, Simon sought his brother's aid, and the elder Williams agreed to offer his advice. Eric suggested to Simon that he embezzle some money from the company in order to invest in some business enterprises Eric had gotten wealthy from, namely the illicit racketeering run by the criminal Maggia families. Desperate to save his father's business, Simon did as his brother suggested. His company’s board of directors discovered his embezzlement and Maggia connection, and Simon Williams was brought to trial. Found guilty and facing a prison sentence, Williams was released when Amora the Enchantress paid his bail and enchanted the authorities. Baron Zemo had read of Williams' case and, intrigued by the newspapers' assertion that he blamed Tony Stark for his downfall, dispatched the Enchantress to recruit Williams for the Masters of Evil. (Zemo believed Stark to be the employer of his enemy Iron Man; in fact, Stark was himself secretly Iron Man). Disoriented by the upheavals in his life, Simon Williams agreed to accompany the Enchantress to Zemo's South American base.