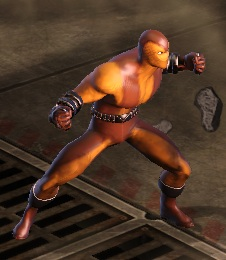 Herman Schultz was a career criminal who, after several prison terms for robbery, built a battle suit that sent out shock waves to quickly open safes as well as give himself a one-up on the authorities. The Shocker had the ability to shock his enemies with his hand held vibro-shock units, but because the vibrations were so fierce, he wore a heavily insulated suit. During his first outing as the self-styled "Shocker" he ran into and defeated Spider-Man who became Schultz's nemesis.

Early on in his career Shocker often acted as either a thief or subordinate to the more prominent of Spider-Man's foes such as Kingpin and The Owl. Shocker joined Mysterio's Sinister Seven, Green Goblin's Sinister Twelve (and even Doctor Octopus' short lived makeshift Sinister Six during Civil War.) Other villains he teamed up with include Rhino, Boomerang, Leila Davis, Trapster, Hydro Man and Speed Demon- these villains along with the Beetle made up the Sinister Syndicate.