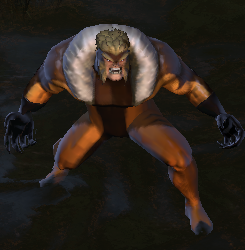 When Victor Creed's mutation first manifested, he killed his brother over a piece of pie. His father would systemically pull out Victor's "devil teeth" in an attempt to purge the boy of his demons. Victor was chained like an animal in the family cellar for years until one day he chewed off his own hand in order to break free, subsequently murdering his father. His mother, though, was dying of cancer, so Victor took her to the hospital. She was killed a few years later by a member of the Red Right Hand.

In 1912. During Silas Burr's trial, a gun battle broke out and he was taken away by one of the bailiffs, a man eventually known as Sabretooth. Sabretooth took him up to Canada, where he met a man who needed his services, a man by the name of Hudson.

Retrieved from "https://marvelheroes.fandom.com/wiki/Sabretooth?oldid=24744"
Community content is available under CC-BY-SA unless otherwise noted.