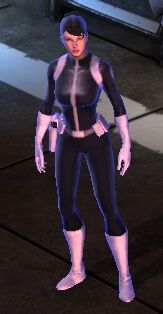 Born in Chicago, she lost her mother the day of her birth when temperatures hit 44 degrees below 0 while her mom was still in the hospital. Because of this, his father never forgave her, which made Maria a cold hearted person. Hill had a brief stint in Madripoor that got her noticed by various heads of state and governments around the world.

After the scandalous affair of the Secret War and its disastrous effect on New York City, S.H.I.E.L.D. director Nick Fury went into hiding. Maria Hill, viewed by the leaders of several nations as being both an efficient agent and, more importantly in their eyes, not directly loyal to Fury or any of his personal cadre, was appointed interim Executive Director. Hill's role had apparently not been announced to the public as yet; a Life-Model Decoy of Fury was regularly used in public to maintain an illusion of normalcy within the Directorate's ranks. Hill was expected to be loyal to United States interests before those of the United Nations, which S.H.I.E.L.D. was supposed to serve before any other country.

Hill quickly established new policies on super-powered heroes, as requested by the President of the United States and his peers in other national governments: to end S.H.I.E.L.D. support for the heroes. These policies were in full effect when Hill tried to prevent the Avengers from re-forming.

In the wake of events in the Savage Land that led to their reorganization, the Avengers suspected her of being complicit in various crimes, but lacked the evidence to prove her malfeasance. For her part, Hill had suspected the latest incarnation of the Avengers of harboring an illicit agenda in connection with, among other things, the House of M affair.