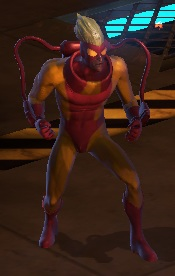 St. John Allerdyce was born and raised in Australia. His powers emerged at puberty, but since he could not think of a way to use them for profit, for years he did not use them except in emergencies. For a time, Allerdyce drifted from job to job around the South Seas. Eventually, he became a journalist for an Australian wire service and covered Vietnam and Indonesia. What he saw and experienced in his travels became the basis for novels he began writing. (He also wrote torrid Gothic romances.) Allerdyce's novels were despised by serious novelists and the critics, but they found wide readership throughout the English-speaking world. Under circumstances that have yet to be revealed, Allerdyce met the mutant called Mystique, who learned of his mutant powers. As a result, Allerdyce joined her new version of the Brotherhood of Evil Mutants under the name of Pyro.

The Brotherhood made a name for itself by attempting to assassinate anti-mutant politician Senator Robert Kelly, only to be thwarted by the X-Men and time-traveling Kate Pryde. Most of the members were sent to prison, and fought major battles with the Avengers and Rom the Spaceknight when they attempted to break out of jail.

Stay at range and avoid his pyro blasts. Pretty easy overall, but be aware Magneto is in the next room and he isn't fun.