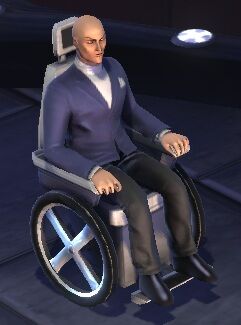 Charles Francis Xavier was the mutant son of wealthy nuclear researcher, Dr. Brian Xavier, and his wife, Sharon Xavier-Marko. While gestating in his mother's womb, Charles' twin was recognized by Charles as an evil presence and he preemptively tried to kill it with his nascent psychic abilities, causing the fetus' miscarriage. After Dr. Xavier's death in an accident, Sharon married his colleague Dr. Kurt Marko who brought his son by a previous marriage, Cain Marko to live in their ancestral mansion. Dr. Marko favored the gentle, smart Charles over his own son, which led to Cain constantly bullying Charles and Dr. Marko secretly beating Cain. Sharon married Dr. Marko because she believed that it would be best for Charles.

Charles' telepathic powers began emerging when he was still a boy, around ten, and, as he grew older, he learned to control them. Due to the immense psychic energies emanating from Charles' head, he became bald at a young age. With his powers, Charles had discovered that Dr. Marko cared only about his mother's money, admitting that he was jealous of Dr. Xavier's wealth. Dr. Marko quickly grew neglectful of Sharon, driving her to alcoholism, and abused both Sharon and Cain. Charles linked his mind to his mother's, in a effort to share the abuse with her and alleviate it. Charles, on one occasion, found himself experiencing the anguished thoughts and emotions of Cain, after Cain had been beaten by his father, which only led to Cain becoming more aggressive toward him and Charles feeling Cain's pain firsthand, but the inexperienced young Charles could not control or end his contact with Cain's mind at this time. Sharon died shortly thereafter, of a broken heart, leaving Charles to live with his step-father and abusive step-brother.