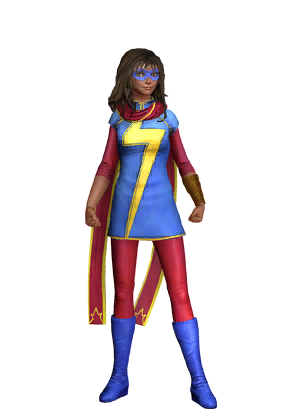 One night, hoping to prove herself as more than the odd duck, Kamala went against her parents' wishes -- and Bruno's -- to go to a party at the Jersey Waterfront; however, her classmates, particularly Zoe Zimmer and her boyfriend Josh Richardson, kept teasing and ostracizing her. Miserable, Kamala was on her way home when Jersey City was suddenly blanketed in the Terrigen Mists, and Kamala along with it.

Unconscious in her Terrigen cocoon, Kamala saw an unusual vision of three of her favorite super heroes -- Captain America, Iron Man, and, of course, Captain Marvel. The heroes scolded the girl for her disobedience and asked her what she wanted in life. Kamala mused that she wanted to be more like Captain Marvel, who she described as "beautiful and awesome and butt-kicking and less complicated." When the vision ended and Kamala emerged from her Terrigenesis, she was shocked to find that she had literally been transformed into a younger Carol Danvers in her Ms. Marvel costume.

Kamala's initial rescue attempt failed as she was overpowered by Doyle and his robot spiders, and her escape back home was met by her upset parents. Her father cheered her up by reminding her how much she meant to them, "perfect the way she is". Kamala took it to heart and spent the next day with Bruno developing her powers and making a costume. She later went back to successfully rescue Vick from Doyle. Though she earned the Inventor's wrath for her actions, Kamala swore that she would protect Jersey City from him as Ms. Marvel.