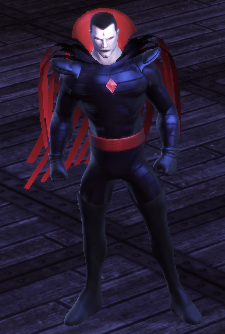 A member of London's Royal Society, Dr. Essex was regarded, by some, to be the greatest scientific mind of his generation and, by others, as a dangerous man, twisted by the obsession of his own research. Being atheist, Dr. Essex believed in Darwin's theory of evolution and discovered that humanity was undergoing increasing mutation, due to what he called “Essex Factors” in the human genome.

Dr. Essex also believed that, in the offspring of certain racially superior individuals, these parcels will, within a hundred years or so, mutate. Dr. Essex's theories were mocked, making him bitter, and his revealing of an unorthodox experiment resulted in his ouster from the Royal Society, including Darwin suggesting that Dr. Essex see a physician due to the trauma of loosing his son. Angry, Dr. Essex stated to Darwin that if becoming a monster was what was required for science to progress, then he would become a monster.

Retrieved from "https://marvelheroes.fandom.com/wiki/Mister_Sinister?oldid=24726"
Community content is available under CC-BY-SA unless otherwise noted.