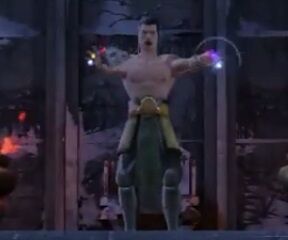 Mandarin was the son of one of the wealthiest men in pre-revolutionary mainland China (who claimed to be a direct descendant of Genghis Khan) and an English noblewoman. Both parents died upon their son's birth, and he was raised by his aunt, who was embittered against the West. Every bit of the wealth he inherited from his parents was spent teaching him science and martial arts, consequently he was broke upon reaching adulthood. Unable to pay the taxes on his family estate, the Mandarin and his aunt were rendered homeless. His aunt died almost immediately thereafter, but he felt no grief for her thanks to his harsh quasi-military upbringing.

Hoping to find a means of avenging himself upon the civilization that had taxed him and rendered him homeless, the Mandarin explored the dreaded Valley of Spirits, where no one had set foot for centuries. There he found the skeleton and starship of Axonn-Karr, an intelligent dragonlike alien from the planet Maklu-4, who had come to Earth centuries ago and been killed by humans.

Over the following years, the Mandarin reassembled the starship's extraordinarily advanced machinery within an ancient deserted castle which he found within the Valley of Spirits, and studied the Makluan science until he had mastered it. He also learned how to use the ten rings he found within the starship. The Mandarin then subjugated the villages around the valley, and, through his science, rapidly became a power that not even the Chinese Army could successfully challenge. He embarked on a long series of attempts to achieve world domination, all of which failed, usually due to the efforts of Iron Man, his American arch-nemesis.