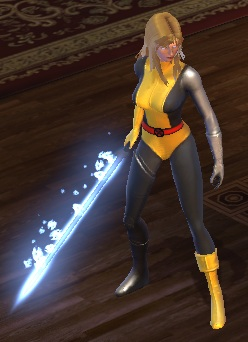 At the age of six, Illyana was kidnapped by Belasco and taken to Limbo, where the X-Men followed. While there, Illyana also ran into alternate versions of the X-Men, who had not been able to return to their own dimension. While attempting to return to her own dimension, Belasco grabbed Illyana/ Kitty Pryde held her arm, until she lost her grip, letting Illyana be taken by Belasco. He told her he loved her and turned part of her soul into a Bloodstone, giving her great potential for power and allowing him to control her. While staying with Belasco, Illyana was constantly beaten by Belasco's servant, S'ym.

Illyana was rescued by Storm and Cat, alternate versions of Ororo Munroe and Kitty Pryde. For a while, Illyana was instructed in magic by Storm, and instructed in combat, by Cat. Illyana had to constantly battle demons and some of that reality's versions of the X-Men, including Nightcrawler, to survive. After attempting to return home to her reality, Illyana eventually became Belasco's apprentice, while secretly gaining advice from Storm's astral form. Cat had been turned into a true house cat and was loyal to Belasco. Belasco attempted to use Illyana as a pawn to bring about the Elder Gods. At this time, Illyana's own mutant powers of teleportation discs were discovered. Illyana was forced to kill Cat to save the life of Storm, whom she later killed to save from being used in Belasco's sacrifice. After burying Storm, Illyana briefly teleported home to her parents farm, where they did not recognize her. She returned to Limbo, where she magically caused her own life force energy to manifest the Soulsword and defeated Belasco. A simple looking blade upon its origin, the Soulsword began to develop intricate designs and forms upon itself the more Illyana used it, becoming more powerful with each use.