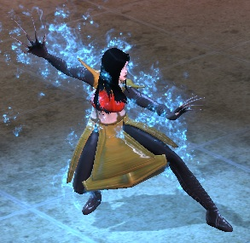 Yuriko Oyama is the daughter of Kenji Oyama, a former Japanese kamikaze pilot during World War II, whose face was horribly scarred in a failed suicide attack on an American battleship. Later becoming the head of Oyama Heavy Industries, Kenji had Yuriko and her two brothers privately tutored by Marcy Stryker, wife of an American soldier named William Stryker. Kenji felt much shamed by his failure decades earlier, and as a result he ultimately scarred the faces of his three children in a ritual design. Becoming the criminal scientist Lord Dark Wind, Kenji developed a means for bonding the virtually indestructible metal Adamantium to human bone, a procedure he hoped to use in creating an army of super-soldiers for Japan. However, his notes were stolen and it took him years to rediscover the process.

Growing to despise post-war Japanese civilization, Lord Dark Wind had the then-crippled assassin Bullseye brought to his island off the Japanese coast. There, Dark Wind replaced some of Bullseye's broken bones with Adamantium substitutes, hoping that in return Bullseye would assassinate Japan's minister of trade for him. Arriving in Japan intent on recapturing Bullseye, the blind costumed crime-fighter Daredevil encountered Yuriko, who sought vengeance on her father, both for scarring her and for the deaths of her brothers, who had perished in Lord Dark Wind's service. Moreover, the young man Yuriko loved, Kira, served in Dark Wind's private army, and she did not want her father to cause him harm. After Yuriko guided Daredevil to her father's private island, Bullseye escaped and Yuriko herself slew Lord Dark Wind just as he was about to kill Daredevil.