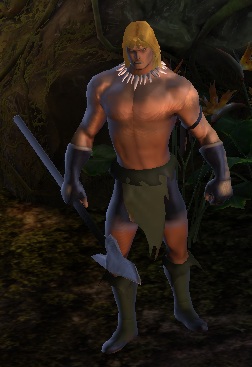 Kevin Plunder was the eldest son of the British nobleman and scientist, Lord Robert Plunder. While searching for an undiscovered element he believed existed in nature, Lord Plunder discovered the hidden jungle on the Antarctic continent that became known as the Savage Land.

There, he confirmed his theories by discovering the Anti-Metal (later determined to be an isotope of Vibranium), a substance that can destroy the molecular bonds of any known metal. Lord Plunder returned to his native England to find his wife had passed away in his absence. Realizing his own mortality, he locked away a sizable sample of the Anti-Metal he had brought back, and fashioned a small fragment of it into a medallion that could be used as a "key" to unleash its power. He then split the key in two, giving half to each of his two sons, Kevin and Parnival, as their inheritance.

Retrieved from "https://marvelheroes.fandom.com/wiki/Ka-Zar?oldid=24701"
Community content is available under CC-BY-SA unless otherwise noted.