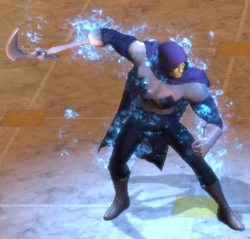 Eric Williams, the brother of Simon Williams (also known as Wonder Man), was born in Paterson, New Jersey. Eric was always the black sheep of his family. His mother would tell him that he was 'born bad', while heaping affection on Simon. Eric's father was charged with disciplining him, but was abusive and uncaring. He even preferred to watch TV lazily, while Eric was torturing the family cat. At the same time, their mother Martha was loving and attentive to Simon, making Eric bitter and jealous.

One day Eric was playing with chemicals in the garage, and caused a fire which burned down their house. Simon felt guilty for having not stopped Eric, and resolved to be responsible for Eric from there on. As they grew older, Simon grew studious while Eric was an athlete. Eric also became more rebellious, and tried to get Simon to join him in his petty thefts. Eventually Eric joined the Maggia and moved to Las Vegas. Meanwhile Simon took over the family business, Williams Innovations.