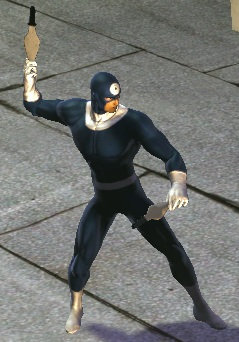 A mercenary of mystery, nothing was really known about the man called Bullseye. Once, he was captured and interrogated in a highly secured U.S. prison, and he related many details about his early life, such as the time his brother set fire to their home in an attempt to kill their father. However, much of this information is suspect, as Bullseye then escaped, taunting his interrogators that much of what he said was false -- especially the fact that it was not his brother who set fire to the house, it was himself. Bullseye proceeded to set fire to the prison, where his father was also held, and he left his father to die once more.

Bullseye first came to notoriety with a series of extortion attempts and murder in New York City, publicizing his antics by agreeing to an interview with The Daily Bugle. Bullseye fought and defeated Daredevil’s attempt to stop him, although the hero soon tracked him down and prevented Bullseye's extortion schemes.